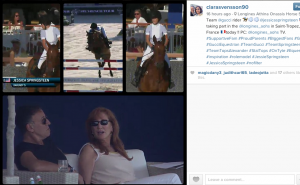 While Bruce keeps recording new songs and working on various projects, he also spends time with his daughter Jessica travelling the world visiting horse shows. He was seen yesterday with Patti in Saint-Tropez (as the pictures posted by Clara Svensson in Twitter show).

Bruce has also performed twice recently. On May 28 he attended the MusiCares tribute to Pete Townshend that was held at the Best Buy Theatre. Bruce gave a long speech, where he remembered The Who show he attended in Asbury Park in 1967 which inspired him so much, and later came back onstage to perform with Roger Daltrey and Pete Townshend, singing during «My Generation» and later on «Won’t Get Fooled Again», where they were also joined by Willie Nile, Billy Idol and Joan Jett.

You can watch all the speeches and performances on this nice video posted in Youtube. Do not miss 25:50 when Steve Van Zandt walks thru the front row aiming people to stand up.

That same weekend Bruce attended Kelly Kilbride’s wedding. She is Patti’s assistant during Bruce’s worldwide tours. At the wedding party Bruce joined onstage the Bobby Bandiera band during a few numbers, including «634-5789» and «Roll Over Beethoven», as Backstreets reports.