Friday, January 6 at the historic Attucks Theatre
Saturday, January 7 at the Norva
Get Tickets 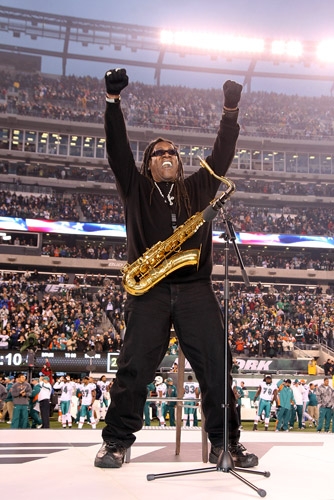 The City of Norfolk’s SevenVenues in partnership with The Norva is proud to announce Clarence Clemons tribute concerts the weekend of January 6 & 7, 2012. Two special concert events will take place: a formal tribute concert with members of the Clemons family in attendance at the historic Attucks Theatre on Friday, January 6 at 8:00 pm followed by a celebration concert at The Norva on Saturday, January 7 at 8:00 pm.

Confirmed artists include E Street Band members Gary Tallent and Vini “Mad Dog” Lopez, plus Southside Johnny, Bon Jovi guitarist Bobby Bandiera, Rock legend Gary US Bonds of Norfolk, John Cafferty from the Beaver Brown Band (the musical voice of the movie Eddie and the Cruisers), The Nick Clemons Band, Jake Clemons, Adam Glenn of Steel Mill and other musician friends. Tickets for the tribute concert go on sale Thursday, December 8 at 10:00 am followed by tickets for the celebration concert on sale Saturday, December 10 at 10:00 am. Proceeds will benefit the Clemons Community Center in Chesapeake and are intended to also benefit a scholarship in Clarence Clemons’ name at Norfolk State University.

In delivering his eulogy following the sudden death of Clemons at age 69, Bruce Springsteen said, “Clarence doesn’t leave the E Street Band when he dies. He leaves when we die.” Rock and Roll legend Gary US Bonds notes that, “in addition to being a big man, Clarence had a big heart. I’m so glad we’re finally able to pay tribute to him in my hometown of Norfolk. We talked about Norfolk all of the time!” Mr. Bonds and Clemons were close friends having known each other growing up in Norfolk. Gary US Bonds, as the architect of the “Norfolk Sound” was critically influential on Clarence’s music style, enabling him to further Norfolk’s contribution into rock music throughout the world. Local concert promoter Bill Reid proclaims, «Not many Southern cities can claim being the birthplace of rock ‘n’ roll. It’s a helluva claim, but it’s true. It’s a sound everybody, including the Beatles, tried to copy.»

The late Clarence Clemons, affectionately known worldwide as The Big Man, captivated audiences the world over for over forty years with his distinguished ability for making his saxophone speak a universal language. For more than three decades, Mr. Clemons lofted Bruce Springsteen’s E Street Band to become, as some have deemed it, the greatest rock and roll band in the world. His signature sound was unique to rock music and is heard at its best on hits such as “Born to Run.” Clemons credited the following sax legends as influences: Junior Walker, King Curtis, and Gato Barbieri; however Clarence developed his own inimitable style, which has made him one of the most renowned saxophonists ever. He has performed live with the E Street Band, the Jerry Garcia Band, the Grateful Dead, and Ringo Starr’s All Star Band. Recordings include albums with Aretha Franklin, Paul Young, Alvin Lee and Roy Orbison. Clemons’ aptitude spanned a range of musical genres from Dave Koz’s “Sax Man” LP to Ricky Skagg’s “Honey”. Most recently Clemons performed live with Lady Gaga and collaborated on her album “Edge of Glory”. One of his own albums, Hero, includes the hit single “You’re A Friend of Mine,” recorded as a vocal duet with Jackson Browne. Additional credits include the spiritually inspired CD Peacemaker to Live in Asbury Park Volumes I and II, featuring Bruce Springsteen and Clarence’s band, Temple of Soul. In 1981, Clarence Clemons, Bruce Springsteen and the E Street Band collaborated on Gary US Bonds comeback hit “This Little Girl” from 1981’s Dedication.

This Holiday season, the Clemons estate has teamed with producers Dennis Bourke and Jim Nuzzo to release previously-undiscovered Clarence Clemons’ Christmas songs. The tracks were recorded all the way back in 1981 by Clemons.

These events are produced in association with Doc Holiday/Scattered Focus LLC. Doc Holiday was present in 1969 when Bruce Springsteen came into the Wonder Bar in Asbury Park, NJ and saw Clarence Clemons playing with Stormin’ Norman Selden’s Joyful Noise and witnessed Bruce asking Clarence to jam with him. From that point on, the Big Man changed Rock and Roll forever.