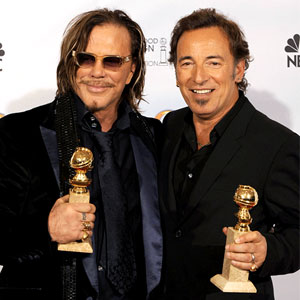 Bruce Springsteen has got a good start in 2009. The song «The Wrestler», written for the movie of the same name, has won a Golden Globe for Best Original Song. The film’s leading actor, Mickey Rourke, has also received a Golden Globe for «Best Performance by an Actor – Drama».

Some days ago Springsteen also won a Critics’ Choice Award for the same song. Director Darren Aronofsky picked up that award.

Meanwhile Rolling Stone magazine published an advance article about Bruce’s new album Working on a Dream. Producer Brendan O’Brien describes the album as «more orchestral» and «intricately arranged, with orchestral and vocal flourishes that recall classic recordings by Roy Orbison and The Byrds«.

According to Rolling Stone sources the tour will not be «a total marathon, and will include 50 to 60 shows divided between the US and Europe. One idea under consideration is a miniset each night devoted to a full performance of one of Springsteen’s classic albums«.