Bruce Springsteen never stops. On tour or not, he’s always working on something.

Today Patti Scialfa has published a new video on her Instagram account where we see Bruce directing a string quartet. When? Is this for a new album? Is it a collaboration for another artist? For a soundtrack? The question remains open, and the only clues are Patti’s text under the video: 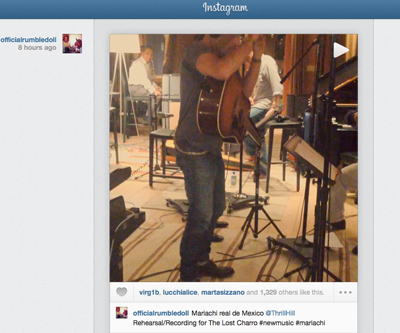 What we know: Mariachi Real de México is a New York City mariachi group who’ve worked with many artists (Springsteen appears in the list of artists in their site) and this recording was done at Springsteen’s Thrill Hill studios (and being a NYC group we assume it was at Thrill Hill’s NJ studios). What was this recording for? No answers yet. Time will tell.

Even more interesting was Bruce’s interview for E Street Radio last Sunday before the last show in Uncasville. Though it only lasted 15 minutes, Bruce talked about a variety of things, including future plans, archival releases and the inner mechanics of the current E Street Band: