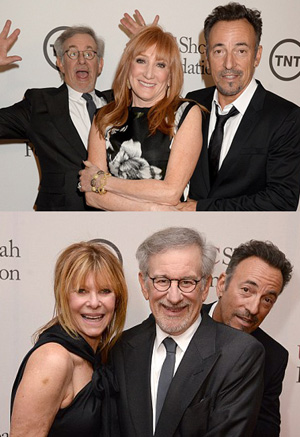 It was the 20th Anniversary of the ‘Ambassadors for Humanity’ gala, organized by the USC Shoah Foundation, and Barack Obama was there to receive this year’s Humanity Award.

Bruce Springsteen shared table with both Steven Spielberg (founder of the USC Foundation) and Barack Obama, and came onstage to sing acoustic versions of «The Promised Land» and «Dancing in the Dark».

Previously Spielberg introduced him by saying Bruce is «this nation’s hardest working lyrical poet for our common humanity. […] I think anyone who has a boss wishes it was you».

Both Spielberg and Springsteen photo-bombed each other at the evening’s photo call.