Though the High Hopes tour ended last week with two shows at the smallest venue of the whole tour (The Mohegan Sun Arena, which holds 7,858 people), Springsteen still had energy for two ‘encore’ shows, this time as the special guest of Joe Grushecky & The Houserockers. 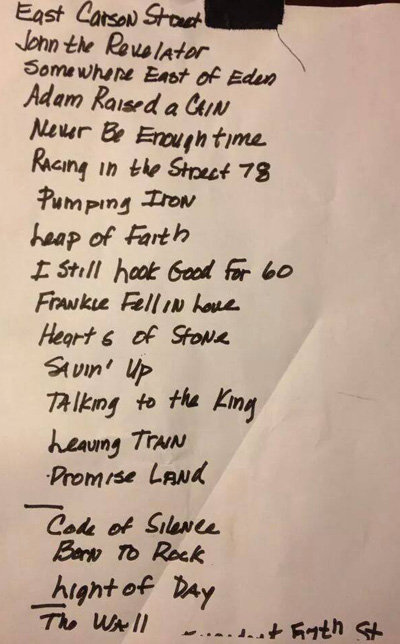 The shows were held at the Soldiers & Sailors Hall in Pittsburgh. Though he was officially a guest, Springsteen quickly took lead both nights.

Both shows had the style and structure of previous performances in the same venue, in 2010 and 2011, and the shows he usually does with Grushecky at every year’s Light of Day festival in Asbury Park.

Armed with an acoustic guitar, Bruce opened for Joe playing 3 solo numbers each night. Thursday’s show featured an unexpected «Mary, Queen of Arkansas» (which he explained, believe it or not, was a song about a transvestite), plus «Two For The Road» (the B-side of the «Tunnel of Love» 7″ single back in 1987, released on Tracks) and the exquisite «Kingdom of Days». Friday’s acoustic opening featured «Further On (Up The Road)», «I’ll Work For Your Love» and «Outlaw Pete».

Then it was time for Joe Grushecky & The Houserockers, who performed 3 songs before Bruce came back onstage, now with his electric guitar, for a rousing «Adam Raised a Cain». The show mixed classic Grushecky songs («Never Be Enough Time», «Talking to the King», «Pumping Iron»…) with the Springsteen songs they usually play on this occasions («Darkness», «The Promised Land», «Light of Day», «Hearts of Stone»…).

But there were also quite a few unexpected surprises, such as the rock version of «Racing in the Street (’78)», «Leap of Faith» or the live world debut of the very rare «Leavin’ Train», a Human Touch outtake released on disc 4 of Tracks. And it rocked (Bruce did it both nights). The two hour show came to an end with Bruce alone onstage again, offering sublime performances of «The Wall» and «Incident on 57th Street».

Friday night featured many changes in the set list. After Bruce’s acoustic performance, Joe and the Houserockers (both nights with the collaborations of Eddie Manion -a Pittsburgh resident- on sax and producer Rick Witkowski on the guitar) did a mini set and then were joined by Bruce. Different songs performed on night #2 included «Atlantic City», «Pink Cadillac», «Better Days», «Human Touch», «Lucky Town» and «Save My Love». The show finished with two solo acoustic performances of «My Beautiful Reward» and «Jersey Girl».