Just some minutes after the second Sydney show ended today, Jake Clemons sent this message on Twitter: «Emotional night in Sydney tonight. You turned into a beautiful celebration. Thank you for your love & support!». Attendees confirm tonight’s show in Sydney was really great. We talked to some American and European fans who follow the Australian tour and they seem to agree Bruce is in great shape and the shows are the best of the Wrecking Ball tour.

The show started with an acoustic version of «Devils & Dust» followed by an impetous «Last to Die», off Magic, in a very appropriate statement for the 10th Anniversary of the beginning of the war in Iraq. «The Ties That Bind» and «Darkness on the Edge of Town» came next to complete a killer set opening, in a show with 14 changes from the previous night. «Out in the Street» featured the popular crowdsurfing, and «Does This Bus Stop at 82nd Street?» brought the audience back to the early days. Then Bruce acknowledged the many signs in the crowd and obliged the requests with «The Promised Land», «Cover Me», «No Surrender» and «I’m on Fire».

Bruce picked a scrapbook from a fan named Karen, started reading it page by page and showing it to the audience, before going into «My City of Ruins» (very late in the set, in an unusual spot). He later invited Karen to dance during «Dancing in the Dark». «High Hopes» keeps its place in the setlist, third night in a row. «Because the Night» and «Open All Night» were next, and finally got the crowd standing and very excited.

Come the encores arrived the first «Jungleland» on this Australian tour, followed by intense versions of «Born to Run», «Bobby Jean», «Dancing in the Dark» and «Detroit Medley», that got everyone on their feet and dancing, in a night that featured a lot of songs off Born in the USA and ended up with a very enthusiastic audience and a tremendous performance during 3 hours and 12 minutes. 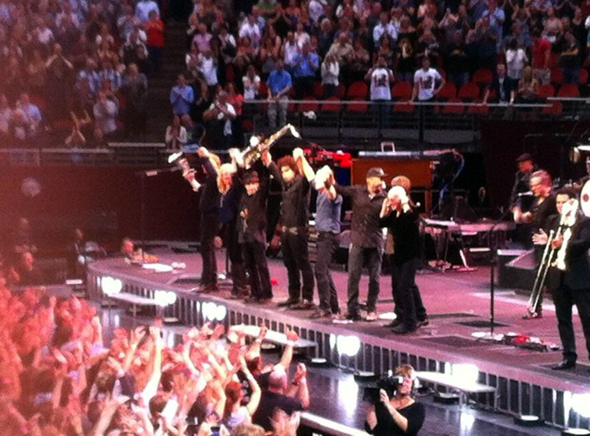