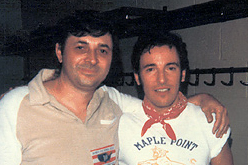 Phil Petillo, master luthier, engineer and inventor, passed away last Friday at age 64. A close friend of Springsteen since he sold him the famous Esquire guitar that appears on the cover of Born to Run, Petillo was a worldwide famous luthier that had worked for many rock stars such as Paul McCartney, Sting, Keith Richards, Tom Petty or Jim Croce.

In 1978 Bruce Springsteen thanked him publicly for his work and dedication, during a concert in Passaic, New Jersey, before Bruce used the famous guitar for a wonderful intro to «Prove it All Night» (see video).