Lots of «Happy Birthday» signs were visible last night at the show in Des Moines (Iowa), just a couple of days prior to Bruce’s big 60th birthday. The show opened strongly with «Tenth Avenue Freeze-Out» followed by rousing versions of «Badlands», «Candy’s Room» and «Two Hearts». Later, and for the third night in a row, Bruce went down into the audience during «Hungry Heart» and circled the pit.

«Youngstown» was a welcome comeback to the show, right after «Johnny 99», and featured the usual magnificent guitar work from Nils. But it was the ‘sign-request’ part that brought the finest moments of the night. «Satisfaction» was played for the second time only, followed by «Cadillac Ranch» and the tour debut of Dion’s fantastic «The Wanderer«. Want more? Because there was more.

Some magical piano notes brought a fabulous «Incident on 57th Street», and yes, for the first time since Dec.29th 1980’s show at Nassau Coliseum, it was inmediately followed by «Rosalita». A holy-shit moment that was followed… you guess it… by «Waitin’ on a Sunny Day» (wouldn’t this one work better in the encores?).

The show also featured a rare «Into the Fire», and lots of greatest hits in the encores, ending with «Glory Days».

In the morning of the same day Little Steven had time to visit Chicago’s WXRT studios to be interviewed and do some DJ work. You can hear, and see him, at WXRT‘s website. 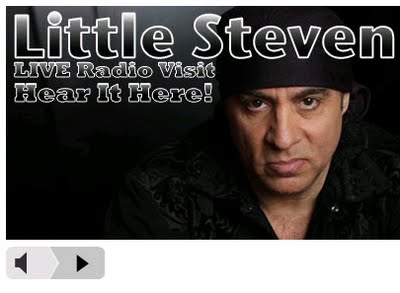