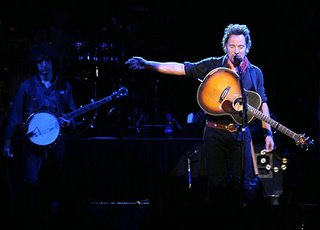 The Band’s influence on this tour is quite clear if you forget the Pete Seeger folk themes for a moment. And Bruce made it even clearer last night in Columbus, when he premiered Robbie Robertson’s brilliant tune «Rag Mama Rag» (released on The Band’s self-titled album), a real surprise that came appropriately right after «My City of Ruins» (back on the set as first encore).

Patti was absent last night, therefore there was no scat vocal intro to «Open All Night». And drummer Larry Eagle debuted yet another instrument on the tour: a real kitchen sink!

A shorter set last night due to the venue’s curfew, which happily meant no «Ramrod» or «Buffalo Gals», thus letting some space for «Rag Mama Rag».

Check out the full set list at the Concerts page.