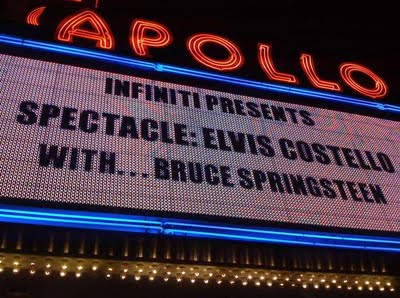 Bruce Springsteen was the guest on Elvis Costello’s «Spectacle» last Friday. The taping took place at the legendary Apollo Theatre in New York and lasted nearly four hours. The show (abbreviated to 1 hour) will be broadcast at a later date on the Sundance channel.

Costello interviewed Springsteen for hours, talking about life, social justice, music, old tours and albums, influences, movies and all kinds of things. They reminisced about the Roy Orbison special they contributed to (A Black and White Night), talked about Pete Seeger and Sam & Dave, and had time for some fine musical performances. Springsteen had help from Roy Bittan and Nils Lofgren for most songs, plus Elvis Costello and his band, The Imposters, who opened the session with a very fine version of «Point Blank». Nils Lofgren was the first guest, and sang a duet with Elvis (Nils’ «Like Rain»), followed by «She’s the One».

Bruce came onstage a bit later, along with Nils and Roy, and surprised with «Wild Billy’s Circus Story» (a request from Costello). Next were «American Skin (41 Shots)» and another unexpected surprise: «Galveston Bay». Bruce also sang a beautiful «The River», but was aborted before it ended.

One of the highlights was Costello, Springsteen and The Imposters sharing the stage for a great performance of Sam & Dave’s «I Can’t Stand Up for Sitting Down», plus a short «Oh Pretty Woman», again left incomplete.

Later on the taping Elvis Costello sang, with Bruce and Nils helping on vocals and guitar, Patti Scialfa’s «Black Ladder», plus «Brilliant Disguise». Next Bruce took the lead again, to end the show, along with the full ensemble (Nils, Roy, Elvis and The Imposters), with a brilliant «The Rising», different to the well known version, and sung with passion and intensity, followed by a strong «Seeds» and a final medley formed by Costello’s «Radio, Radio» and Bruce’s «Radio Nowhere», ending the show just seconds before midnight. In the audience at this special show were Allen Toussaint and Jesse Malin.