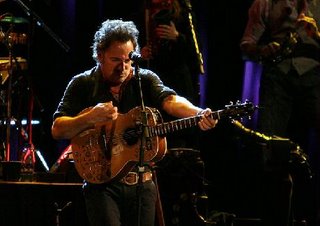 The Seeger Sessions Band returned to the U.S. after a short European tour and opened the American tour last night in Mansfield, Massachussets. Patti’s back in the band, and the horn section increased from 4 to 6 members as Mark Pender and La Bamba joined the band mid-show and raised the entertainment level with their skills.

Peter Wolf, as usual in Boston everytime Bruce plays there, joined to sing the classic «Dirty Water» plus «Buffalo Gals». «My City of Ruins» was dropped from the set and Bruce did «Bring Them Home» instead, the Pete Seeger song that debuted in Paris and re-appeared in Stockholm during the last show in Europe.