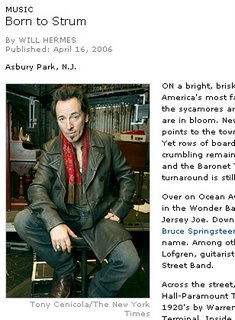 In a very interesting article published yesterday in The New York Times Springsteen reveals details about his new album and other projects he started, including a second volume of the «Tracks» boxset, and a new album with The E Street Band. Listening to tapes for the new volume of «Tracks» Springsteen re-discovered the 1997 sessions for the Pete Seeger tribute album «Where Have All The Flowers Gone» and started working on his current new album (and the Tracks Vol.2 project was momentarily shelved). About the new E Street album he comments: «I write songs all the time. I have an E Street Band record that I have a lot of stuff written for. I’m just waiting for the right time to do it.»

Check out the full article in the NY Times website.