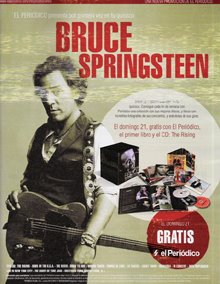 A big part of Springsteen’s discography will be reissued in Spain starting September 21st thru the newspaper El Periódico. The paper will deliver a CD & book every Sunday, and each Springsteen album will feature the new vinyl-replica artwork. Each CD comes with a 36-page book, with text in Spanish, with many unreleased photos, full album and tour reviews and the song’s lyrics (in english). The text has been written by Point Blank’s director Salvador Trepat, who has also helped choose most of the previously unpublished pictures.

The first volume of this CD-book collection is «The Rising» and it will be given away Sept.21st with El Periodico’s Sunday Edition. There’ll be another 15 volumes in consecutive weeks, which will be sold for 9,95 € every Sunday. The collection includes the following albums: Born in the U.S.A., The River (2CD),