We went to Giants Stadium in hopes of getting a lot of variety and great stuff. And we got it. We attended the first 3 shows, and found quite a lot of differences from one night to another. Needless to say our favorite night was October 2nd, when Bruce did the Darkness album «from top to finish». Not just because of the set list or because it’s our personal favourite album (of the 3 being performed), but because the performance was phenomenal.

Night 1. Sept.30th:
The first of 5 nights at Giants Stadium, Springsteen debuted a new song, «Wrecking Ball», specifically written for the occasion, and sang the complete Born to Run album. A good performance, but perhaps not a top-notch one as expected. There were good moments, and a great version of «Meeting Across the River», with Curt Ramm on trumpet, followed by a superb «Jungleland», but we still had the overall feeling of a first night performance. The encores brought some fine performances of «The E Street Shuffle» (again with Curt Ramm) and «Growin’ Up» (with a long story about his 60th birthday). Willie Nile joined the band for 3 songs, including a brilliant «Rosalita» that ended the show.

Night 2. October 2nd:
The Darkness night, and a show for the ages. The show opened once again, as it would do at each of the 5 shows at Giants, with «Wrecking Ball», followed by an excellent «Tenth Avenue Freeze-out» that put everyone on its feet. Springsteen was in great shape, you could sense it, feel it, see it, and when the moment arrived to perform Darkness on the Edge of Town, the energy level increased and the E Street Band was at the top of its game. Each of the songs from the album was performed with fury and passion, with conviction and intensity. Each song arrived and kicked us like a hurricane, highlights being the «Adam Raised a Cain»/»Something in the Night» duo, plus «Streets of Fire», «Prove it All Night» (surreal solo by Nils) and a heartbreaking «Darkness».

The highlight of highlights came with «Racing in the Street», possibly the most beautiful song on the album, performed in such a sublime way that night, with a never ending instrumental finale where the whole band shone like a diamond.

Request time came a little later and brought «Be True» and the E Street Band’s live debut of «Jailhouse Rock». Bruce and the band were on fire, and every song was performed at a faster tempo, including a vibrant «Long Walk Home» and a sped-up «Thunder Road» that sounded like in the old days. There’s no doubt this show will rank as one of the best E Street Band concerts in years, immediately reminding us of the great St. Louis concert during the Magic tour.

Night 3. October 3rd:
Saturday night was Born in the USA night, his most succesful and famous album. The album that led Springsteen to stardom and to Giants Stadium in the first place.

It was the night to have fun and perform all the hits, and the whole audience had a great time from the very beginning, with enthusiastic versions of «Out in the Street» and «Hungry Heart» (that took Bruce all around the pit, and then crowd-surfing from the back of the pit until the front of the stage). The hits from the Born in the USA album brought the show to another level and Giants Stadium was a big party, bringing back the memories of the 1985 tour. It was a solid performance, but like night #1, not his greatest concert.

The rest of the show featured the usual tour standards, plus two great performances of two songs off the Magic album: «Long Walk Home» and «Last to Die», with a powerful performance on vocals from Steve Van Zandt.

Once the anthems were over, request-time arrived for the encores, with Tom Waits’ «Jersey Girl». The intensity returned with some old great songs, including a fabulous «Kitty’s Back«, followed by a fun and strong «Detroit Medley», «American Land» (with lots of guests from the Seeger Sessions band), an unexpected «Waitin’ on a Sunny Day» that came out of the blue, and «Thunder Road» to put an end to the show. As good as the performance was, it was hard to beat the emotional level of the previous night.

Night 4 (October 8th) and Night 5 (Oct.9th):
Both shows looked a bit like a repeat of shows # 1 and # 3, with a few set list changes. Born to run was again the album chosed to be played in its entirety at the Oct.8th show, and 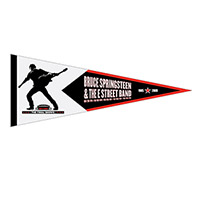 Rarities arrived via sign requests and included a hot and rarely performed «Saint in the City», plus «My Love Will Not Let You Down», «Because the Night» (again with superb work from Nils) and < span style="font-weight: bold;">«Human Touch».

Bruce thanked all the people from all over the world who attended these series of shows, and mentioned «Spain, Italy, Holland and Germany», and then launched into «Sandy», as a tribute to the late Danny Federici. The show ended with «Rosalita» and the classic «Twist & Shout».

Much have been said about the final night and there are mixed reviews. There were lots of rumors about possible guests but none of them came to reality. Some expected an extra-special show for the occasion and were dissappointed, others said it was a great show to end the series and say goodbye to the stadium.

Another Born in the USA night. A very long show, with 31 songs, 3 hrs and 15 minutes of music and a few surprises. 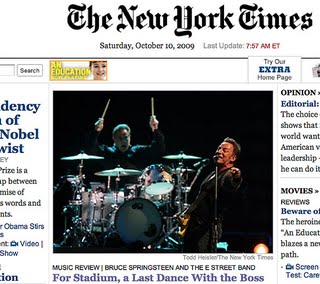 After «Wrecking Ball» and «Badlands» arrived an always welcomed «Spirit in the Night», and «Hungry Heart» included again the trip to the pit and the crowd-surfing.

«Tougher Than the Rest» was another addition, sung as a duet with Patti Scialfa, who was back in the band for the last 2 shows. «Last to Die» and «Long Walk Home» were again brilliant. Jay Weinberg joined for «Born to Run» as he did on the second night of the stand.

The encores brought again another phenomenal «Kitty’s Back», lots of firecrackers at the end of «American Land», plus the fantastic Rolling Stones tune «The Last Time», (last performed with the E Street Band on January 1st 1979, at the last show of the Darkness tour). «Seven Nights to Rock» was a nice extra shot of rock, and when everyone thought Bruce was going to go on and on and on, he put an end to the show with the beautiful, and appropriate, «Jersey Girl».