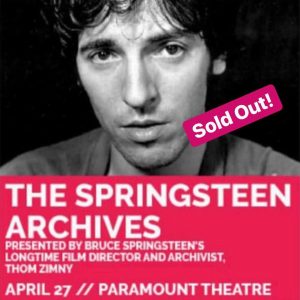 As part of the Asbury Park Film +Music Festival, a lot of unseen Bruce Springsteen footage was show on April 27th. Thom Zimny’s The Springsteen Archives was shown on the big screen at the Paramount Theatre, and it included lots of fabulous performances, including «When You Walk in the Room» and «Quarter to Three» from the famous 1975 Bottom Line shows in New York City, plus «Sandy» and «New York City Serenade» from a 1973 concert at Nassau Community College.

The film also included killer clips from the post-Katrina New Orleans show in 2006, a fantastic «She’s the One» from 1988 and even a clip of Patti Scialfa performing with Cats on a Smooth Surface in Asbury Park in 1984, they day Bruce first saw her on a stage.

«We were superstitious about being filmed. A magician should not look too closely at his magic trick», said Bruce, who admitted he had never seen some of the videos. Bruce pointed out Barry Rebo, who was in the audience, as the person responsible for filming many of his early days shows (his films appear in the Born to Run, Darkness and The River boxsets).

Most interesting is the fact that Bruce recognized they want to release those shows, in some form, starting with the New Orleans 2006 show. Hopefully this means an expansion of the current Archive download releases and we get some video soon.

Here’s the complete list of videos that form The Springsteen Archives film: