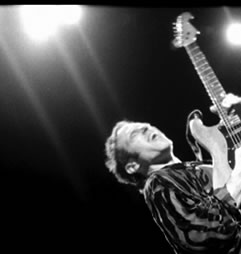 E Street Band’s guitar player extraordinaire Nils Lofgren has announced in his official website that he will have surgery done in New York next Thursday Sept.30th. to replace his hips. These are Nils’ words, as published in his site:

«Due to a long, beautiful life on the road (40 years) that’s included back flips with guitars, dive rolls, leaping off drum risers and trying to break stage floors with pounding legs due to the amazing energy I gratefully continue to get from you, the audience, in addition to thousands of hours playing aggressive basketball, (my favorite sport to play) on mostly cement, city courts, I have finally destroyed both of my hips and they are both bone on bone with no cartilage left. Thus , I am headed to NYC with my fabulous wife Amy to have bi-lateral hip relacement this Tuesday, Sept. 30th (both hips completely replaced). (…) God willing, it will all go well and I’ll recover completely. I hope to be back home in AZ. to continue rehabbing by late October and start more guitar lessons and writing. If all goes well, I hope I can start doing my acoustic show touring by early Spring.».

The fact that he expects full recovery and be able to tour «early Spring» could indicate the rumoured E Street Band tour in early 2009 might be that, just a rumour.

Meanwhile, Nils has recently released a brand new album. Under the title «Loner – Nils Sings Neil» he has recorded 15 Neil Young-penned tunes. Nils was part of Neil’s band in the 70’s and participated in some of Neil’s best albums, including the classic «Tonight’s the Night».

The great Southside Johnny also has a brand-new cover album. He covers Tom Waits, and even has Waits participating in the album, singing a duet with Johnny. «Grapefruit Moon – The Songs of Tom Waits» includes 12 songs written by Waits and performed here by Southside with the powerful La Bamba’s Big Band.