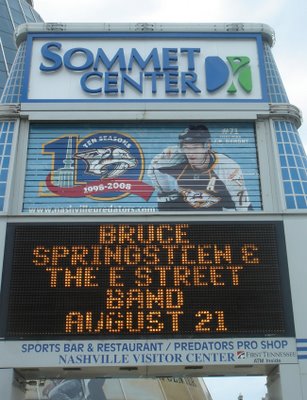 First off, sorry for the long delay in updating the site, but we’ve been travelling thru the US and were able to catch the last 3 shows of the tour, therefore making it more difficult to update this page. Anyway, after a great show in Nashville (which featured Dave Bielanko of Marah during «Rosalita», plus a plethora of rarities : «Good Rockin’ Tonight», «I Fought the Law», «I Walk the Line», «Mona» or «Held Up Without a Gun» to name some) we attended what is now considered the best show of the tour, St.Louis, and for our money the best we’ve seen since 1981!

St.Louis was a truly unforgettable night, plenty of great songs, rarities and most important, a fabulous performance. Bruce Springsteen’s artistry at his very best. You always hear how good he was «back then», in 1981, or 1980, or 1978… well, we had a chance to see «that» kind of performance once in our lifetime. This was St.Louis, a fantastic show that ended in a delirious, triumphant 9-song encore in front of an ecstatic audience. Everyone went totally nuts and the 15,000 or so fans gathered at the Scottrade Center were really loud and noisy.

There’s too many highlights to mention (in fact, almost every song was a highlight performance) but let me say «Then She Kissed Me» and «Mountain of Love» were nostalgic bursts of rock’n’roll that put our mind back to the 70’s. «Adam Raised a Cain» was simply memorable, the greatest guitar solos ever on this song. Add «For You» to the equation, plus a blistering «Gypsy Biker», and «Not Fade Away/She’s the One», and a note-perfect «Jungleland», and… what? «Drive all Night»? Yes. «Rendezvous»? Yes. «Backstreets»? Yes. Plus a delirious «Little Queenie» followed by «Twist and Shout» in the middle of a total feeling of euphoria and, also, exhaustion. Three hours and fifteen minutes later the show was over, but in our memory it’ll last forever.

Kansas City had the honour of being the last stop on the Magic tour (as Bruce himself pointed out, this was the last official Magic tour show). After the spectacular St. Louis show, it was hard to not feel somewhat dissapointed with this concert. It wasn’t bad, in fact it had some great moments, but it had its low moments too (don’t get me started on «Mary’s Place», or the sign asking for «Working on the Highway»). The show featured the first ever song sung by Max Weinberg: The Shirelles’ «Boys» (know for the Beatles version, sung by Ringo Starr), plus another tune sung by Soozie Tyrell, the Rolling Stones’ «It’s All Over Now«. Plus, let’s not forget the world premiere of «Ricky Wants a Man of Her Own» (off Tracks), followed by «Cynthia», and the tour debut of «Devils & Dust». And as a final bonus, the show ended with John Fogerty’s «Rockin’ All over the World» (which is not a Creedence song despite the Bruce’s official website note). Not a bad show, but certainly not the expected end-of-the-tour closer.

See «Then She Kissed Me»:
[youtube=http://www.youtube.com/watch?v=Y0GfHJGmLQ8]